Want to build an LF/MF camera. Now what?

I´d come to the conclusion that I´d like to build my own camera. Exactly why is a difficult question to answer, but I´ve always been fond of using my hands and pondering about my own solutions to things. Reading more than 3 photography rags a month I sooner, rather than later had to come over pictures captured by a device I would have to copy. The trigger was a series of Fuji 6x17 pictures taken in the Torres del Paine, and I nearly fell off my perch. I beseeched my fellow RangeFinderForum friends for help. I wanted to build a camera capable of such things. I started a thread entitled: "DIY 6x9 or 6x12 or even 6x17" on the forum. And suggestions soon popped in. One that I´d contemplated initially was to chop two 6x9 folders and join theses together, attaching a large format lens with shutter in front and hey presto! Or build a similar camera from scratch like Dean "Razzledog" Jones unbelievable creations. But I had my doubts. I can´t get myself to chop up an old camera, no matter how dilapidated. Secondly, I´ve not much tools for the metalwork involved. My heart wanted a 6x17, but I understood that a camera with a Graflok 4x5 back would be infinitely more adaptable. You can shoot 4x5 sheet film or add a 120 roll film back and shoot anything from 6x4.5 to 6x12. all in the same camera. If I needed the 1:2.8 ratio, I could always crop to fit. I looked at Sinar Handy and Cambo RS super wide designs, and found a number of very impressive DIY projects on the net mimicking these successfully. The "Dorkasaurus" the "Darth Handy" (look them up) to mention a few. However, many of these required the use of lathes and equipment I neither had, nor wished to invest in. Wooden cameras of similar design could also be found. These designs were more like it, maybe not as good looking, but certainly easier to manufacture with hand tools. Notable designs are the "Neretta" by Sandeha Lynch, a 4x5 "point and shoot" by Nana Sousa Dias, Britt K Leckman´s 4x5 "Pancake Camera"

I finally decided to follow this train of thought and not let myself be led astray. I told myself I´ll be making a 4x5 point and shoot type camera, with a LF lens in Copal or Compur shutter, either hyperfocal focusing, or a helical focusing (no bellows here, not this time), built for hand held shooting, yet can also be tripod mounted and finally; no movements. All manufacturing to be done out of wood. I took inspiration from all the cameras mentioned, and then a few. But I copied none. For one thing, it can be dismantled. When I choose to add another lens, I can manufacture a new lens box and reuse the frame, back, foot and viewfinder. The handle will not be detached.

Once the important decisions were made, making the camera wasn´t that difficult. Above right, you can see the first incarnation of the camera. Fuji SW 90/f8 LF lens in a Copal #0 shutter on a helicoid of Chinese manufacture. Mounted on a Linhof type lens board. A chambre noir made out of a flower pot!. A wooden frame to which a Graflok back is attached on one side, and a sub frame come light trap on the other. The chambre noir slides over the subframe and friction holds the two together. A foot added to fill out the space left over, a handle on the right hand side made out of oak.
The viewfinder is raised up so that the roll-film back will not gash my nose, since found unnecessary and modified. Above left you can see the Graflok back with ground glass inserted. And to its right, with the DAYI 6x12 back attached. Below right you can see the different components before assembly. Can be taken apart again in 2 minutes. 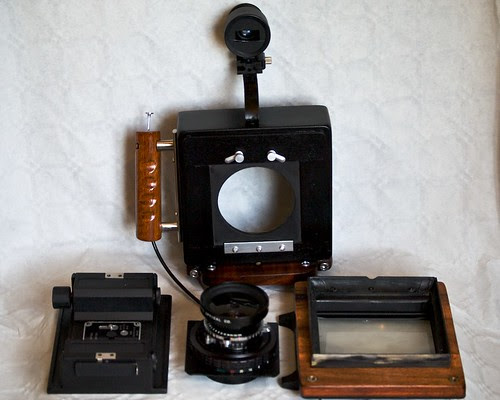 However, once put together, and taken out for a test run, there were a few things that needed doing. One, the viewfinder need not be mounted up high (added to parallax issues) the handle was too small and mounted too close the the body. Three, the unavoidable light leak. More on this later.
How do you do it? Well its not difficult really. All you need to make a functional camera is to have a lens, a film holder or transport, a light tight box, a shutter, and the lens mounted at the correct distance to the film plane. Lens, shutter, helicoid and film holder were all purchased from ebay. The viewfinder too, but I could have made one from say a door peep hole lens, or similar. The light tight box is just that a box, open at one end and a fitting for the lens board at the other. The distance from the rear of the shutter to the film plane should be 99.1mm for this particular lens. In practice there may be sample variation, which is why collimating the lens is important. More about that later, too. Tools and materials used:


Time used, 40 hours maybe. Could do it in half that now that I know what I know. Worth it? Well, yes - I think. At least it gave me the taste for shooting film again. It is capable of taking respectable pictures.
Posted by Ezzie at 10:03