DIY it? Well yes, why not? Inspired by my success with the "I Adore" 6x17 made from a Cognac case, a Vermeer 6x17 curved film plane pinhole camera, and a by no means subtle hint from a friend who sent me a wine bottle case with a pinhole drawn on one side.

A wine bottle case then. This would be easier than the 6x17, eeh well. Maybe not. This is the kind which is hinged and has a half open front. Very tall though, so I thought maybe it had potential for something wider than 17cm. 24 maybe? But at the same time, shallow, maybe 85mm or so. So the focal length would not be that substantial, also limiting the image circle to much less than 240mm.

OK, how about a curved film plane? That might help a bit. But a little basic geometry calculations later, I found out that the circumference of a half circle with a radius of approx 85mm would be approx 267mm.  240mm film plane would require 163 degrees field of view. Hmm, not sure that the pin hole would cover that.

What if the film plane was curved, but not quite semi circular? OK, the edges would need to be farther away from the pinhole than the centre, but that would be the case with a flat film plane too. 85mm centre, and 105 at the edges would´t be that bad. And distortion may not be that noticeable. As to vignetting, there will necessarily be a bit, but without testing it, I would never know.  Ahh well, no guts no glory.


Lost the hinges, I needed the two halves to slide together. I then clad the inside of the top (to become the front), with 3mm ply. Drilled a rather large hole for the pin hole opening, to avoid vignetting (as the pinhole would be behind the front panel).

Used foam core to make an insert. The film guides at each end of the film gate are made out of threaded rod clad in heat shrink. The film is threaded underneath the guides so that it is kept flat against the gate. Spool holders are made of 5mm machine screws. The bottom set function as pins on which the film spool can rotate. The upper set are both winders. The screws have had their heads filed down to a flat spade shape and enter the spool for winding, they are also retractable to enable film loading

Innards painted a flat black. 0.500mm pinhole. Guillotine shutter made of cardboard, a foot fashioned after the quick release plate for my tripod. A couple of latches to keep it closed and finished it is.

Quite happy with the results, it sure is wide. And the vignetting is certainly visible, but less so than I feared. Anyhow, pin hole images with no vignetting doesn't seem right.


EDIT, 12.02.2014: Added a diagram showing how the film holder and spooling mechanism is put together: 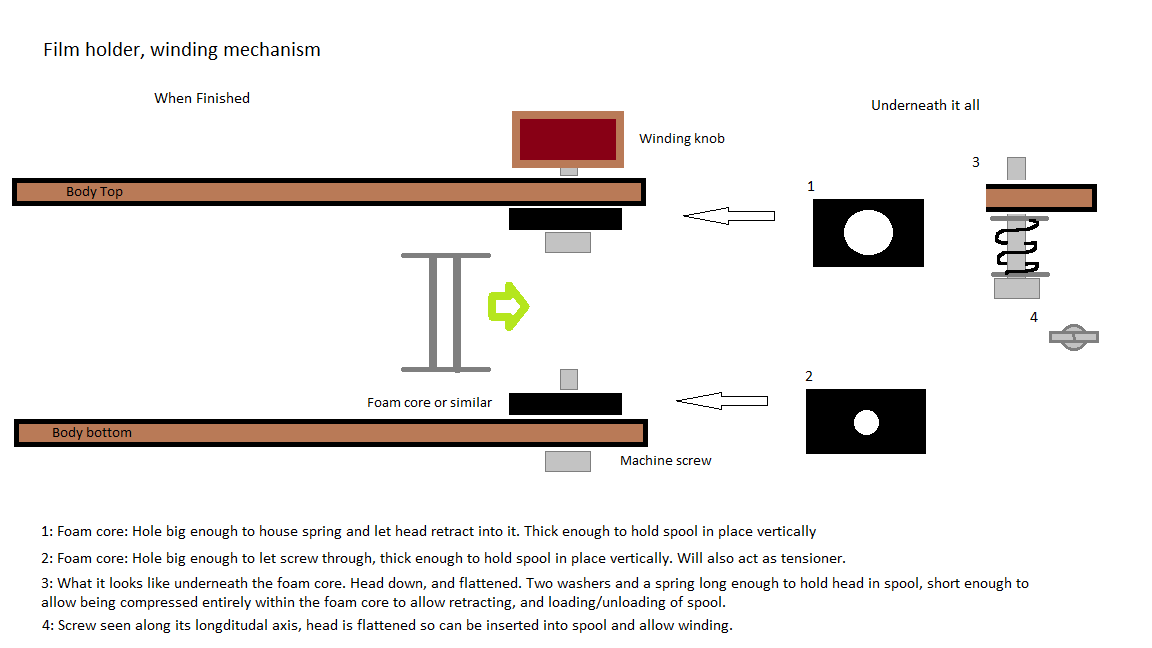